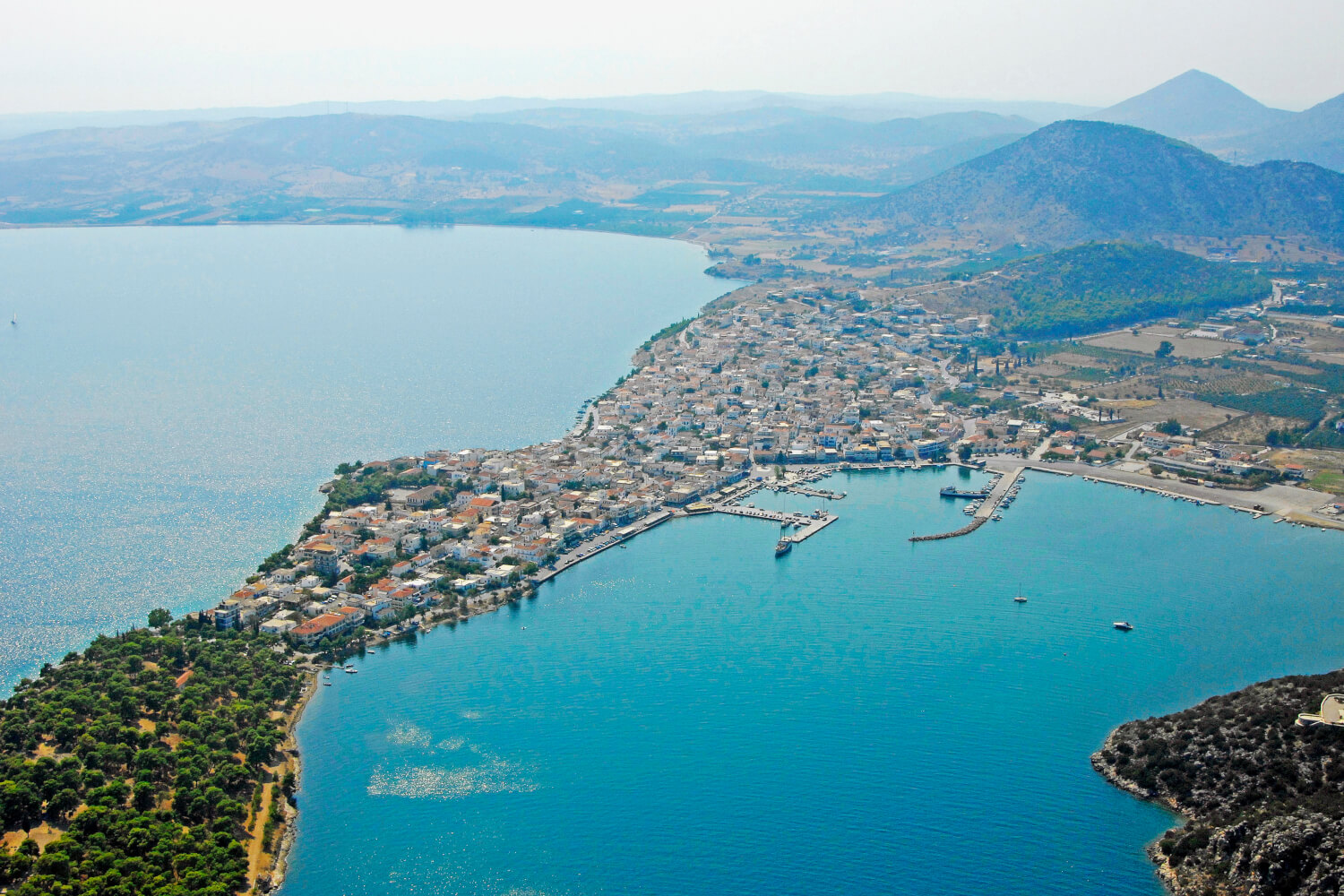 The charming and welcoming Ermioni is located in the south part of the Argolis region in the Mythical Peloponnese, Ermioni is a wonderful village by the sea (giving the impression of being on an island) with a traditional side and a modern one, offering everyone whatever fits them best!

We can easily access the famous ancient Theater of Epidavros and Asclepios sanctuary (one hour by car), Mycenae (that we all know from the war of Troy depicted by Homer) and the first capital of independent Greece: Nafplion.

3 islands are easily accessible, each one more particular and unique than the other. Hydra is simultaneously typical and atypical due to her main characteristic: all means of transportation considered non-traditional are forbidden, therefore the only way to get around is by riding a donkey! Spetses is known as the fragrances island but also as the birth place of the first female Admiral of the world and heroine of the Greek War of Independence in 1821: Laskarina Bouboulina. With authentic breath-taking landscapes, small forests on hills, an appeasing way of living, Poros has more than just a story to tell us.

We also propose a walk at the pine-cladded peninsula of Bisti where you’ll simply be amazed by its beauty, find it to be the ideal hideout during the summer’s hot days thanks to the numerous trees and the shadow they offer and why not take your swimsuit and towel for an extremely enjoyable rock bathing and swimming in the crystal blue waters surrounding it!

History has it that the name Ermioni was somewhat controversial. Other variations on the name include Ermion, Ermiona, Ermionia and Ermionidi. One argument tells of the traveler Pausanias who, while visiting Ermioni in 166 A.D., was told by its inhabitants that it was Ermiona who found the village and introduces the use of fire. Another argument states that Zeus and Ira came and anchored theor boat at the Temple of Hermes (the guardian god of the village) and gave the name Ermion. Ermionia was the name referred to by Stravona and Euripides and by Thoukidides. It was homer who wrote about Ermioni.

Historical Points
Ermioni was always known to be an extremely important commercial center with shipyards being its main source of income. Another source of income came from its seashells called “Porphyra”. The red dye from these shells was used to color the garments of the nobles and kings, including those of Alexander the Great. Surrounded by fortifications, the original city of Ermioni boasted such sites as the temples of Demetra, Dionysos and Artemis. One of the most beautiful temples was dedicated to Poseidon, god of the sea and protector of sailors. Unfortunately, most of these temples are now under the sea.

Ermioni’s Moments in history
Peloponesian wars (5th c. B. C.):
Ermioni, a very rich and independent city chose the Spartans as its allies but, as a result suffered continuous raids and plundering by the Athenians in 430 B.C. As an indication of just how important Ermioni was, silver and bronze coins were found inscribed with Ermioni’s name.

Turkish Domination (15th -19th c.):
Still strong, Ermioni’s naval forces, together with Hydra and Spetses, liberated the Peloponnese from the Turks by 1827. At the close of the battle, Ermioni in February 11, 1827, became the seat of Grece’s national parliament.

Local produces
Pomegranates: Although, as yet, Ermioni does not have a ‘Designation of Origin’, (like the French ‘Appellation Controlee’), it is famous for its locally grown pomegranates. The humble pomegranate has excellent health benefits and is recognised as a major source of antioxidant nutrients that protect against heart disease and other ailments. Recent research has focused on its potential use as a treatment for cardiovascular disease, diabetes, and various forms of cancer The fruit arrives in the local markets in October, and a buyer’s guide to buying the best fruit is to wait until the fruits are a rosy red colour, not the pink/white colour of inder-ripe fruits.
Olive Oil:Although the main centre for olive oil is Kranidi, the local Ermioni area is a big producer of excellent quality of olive oil. The new crop arrives from November to Febuary. Although the Kalamata varieties are often considered the best, locals would hotly dispute this.

Oranges:The orange harvest starts around October and continues up to December. At this time of year the local fruit shops, and especially the local weekly market, held every Thursday, are ablaze with the colour of every type of orange. picked striaght from the tree and still with leaves attached the aromas that come from thses fresh fruits are to be experienced.Fish:The main fishing port of Ermionida is Kilada, a village some 13 kilometres from Ermioni, it is possible to buy many types of fish and seafood locally, from the boats, from the local market on Thursday or from the fish shops in town. For the amateur, or professional, fisherman there are many places around Ermioni that provide opportunities for catching many types of fish, or octopus. Advice is easily found by walking down by the port and asking many of the local fishermen hanging out by their boats, or enjoying a hard-earned coffee in one of the cafe-bars.

Accomodation and excursions in the beautiful Argolis region

Check out our offers

Find out more or adjust your settings.

Strictly Necessary Cookie should be enabled at all times so that we can save your preferences for cookie settings.

If you disable this cookie, we will not be able to save your preferences. This means that every time you visit this website you will need to enable or disable cookies again.

This website uses Google Analytics to collect anonymous information such as the number of visitors to the site, and the most popular pages.

Please enable Strictly Necessary Cookies first so that we can save your preferences!